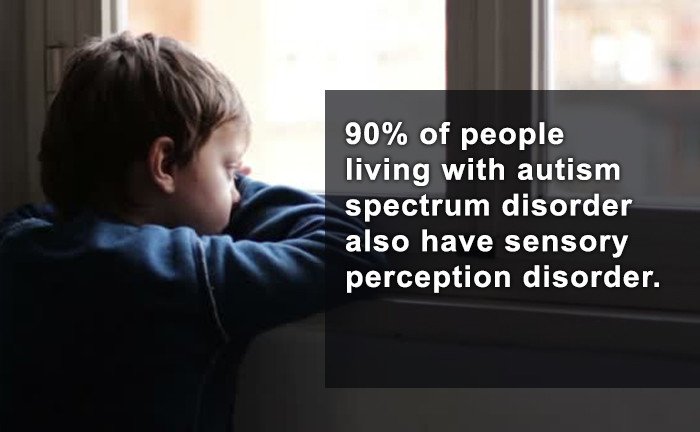 What Sensory Processing Disorder Feels Like To People With Autism

Maybe, you love to go for an evening run every day. You leave your house in the cool of the evening. It’s drizzling but you do not strongly mind the wetness and the squelching of your feet within the sneakers. You set off at a quick trot, the wind pushing spray against your face. A few minutes into the run, you let your mind rest and your subconscious takes over the task of putting one leg before another. Birds twitter merrily and the smell of a roast is coming from the neighboring house. The last rays of the sun, shining through the drizzle warm up your face as you run. Fifteen minutes later, you’re back from your run. Just another event in the set of events which you find so easy to do, but which might prove to be hell on earth for someone who has sensory processing disorder.

Sensory Processing Disorder is a defect in the interconnectivity of the brain’s neurons affecting the perception and response to a stimulus. In layman terms, sensory processing disorder is a situation where the individual does not see as he is meant to, does not hear as he is meant to, does not feel, smell, taste as he is meant to. The pathways for the reception of sensations are altered so the person with sensory processing disorder may overfeel the sensation, which can be quite maddening, or not have a sufficient feel of the sensation. Also, the person might be feeling a different type of sensation from the one he is actually experiencing, for example, a light stroke of the hand may elicit a salty taste and the color yellow may smell like violets.

Be as it may, at current, sensory perception disorder is not recognized as a proper disease entity, and as such poor funding may hamper research into the disease and sufferers may not be covered by insurance schemes available.

A common link in their experiences is the feeling of powerless. So much happening, and all of it happening at once. So much noise, so much light flashing, people moving, talking, laughing. It’s all happening at once, and the sufferer has little or no control over the situation. All he can do is hunker down and hope that the storm will break and the sensory overload would come to an end.

Among some autistic people with sensory perception disorder, some manifestations are restricted to only one sense. They may be able to see with an unbelievable clarity of vision and be able to recall almost anything that they have committed to visual memory. They might hear very low sounds with the intensity of a stereo system. They may be scared of mundane things such as pajamas, a certain type of stuffed animal.

Occasionally, the sensory perception disorder manifests as a decreased sensitivity to certain stimuli. Such persons who have Sensory perception disorder may sustain massive injuries and shrug it off as if it was just a scratch. They may find it hard to pay attention in class because the teacher’s voice may sound so faint. This may lead to relationship issues, because communication is key to any relationship, and proper communication is based on proper perception.

The presentations of sensory perception disorder in autistic people varies greatly with the individual. But one common thread runs through all this. The way the average human sees the world is not the same way an autistic person with SPD would see it. With proper counseling and therapy by qualified personnel, these persons may slowly learn how to cope with their ever-changing environment.