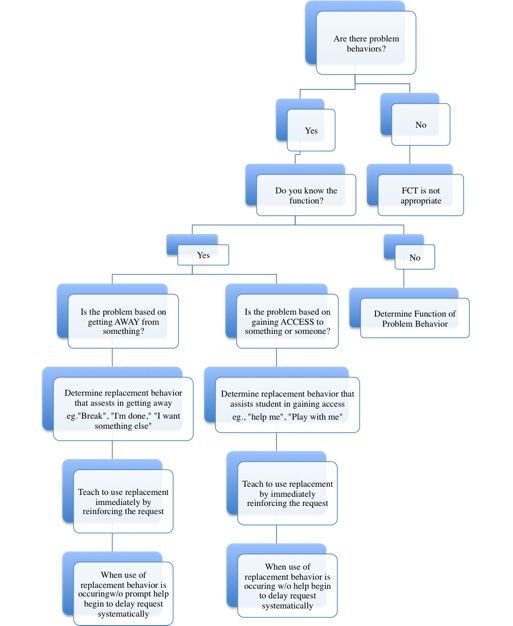 What is Functional Communication Training & Why Use FCT

What is Functional Communication Training?

Functional communication training (FCT) is a practice that came from research on Functional Behavioral Assessment (FBA). The purpose of FBA is to determine the purpose of a behavior that is interfering with a learner’s growth and development, although this behavior may or may not be used to communicate.

For example, an FBA may determine that a seventh grader runs away from science class during group work to avoid the high noise level in the room. Once the FBA has determined the function of a single interfering behavior or a group of behaviors that all serve the same function, FCT is used to teach a new, communicative behavior that replaces this interfering behavior (i.e., the communicative behavior serves the same purpose as the interfering/target behavior).

Using the previous example, the seventh grader may be taught to hand the teacher a card with a picture requesting that he work in the quiet library when the noise level becomes too much to handle. FCT typically involves teaching a new behavior while not providing reinforcement for the interfering behavior. Gradually, learners stop using the interfering behavior when they realize that it is no longer effective in getting them what they want.

Why and When to Use Functional Communication Training? Functional communication training (FCT) is particularly useful with learners with autism spectrum disorders (ASD) because of the communication challenges associated with autism. Also, many learners with ASD engage in interfering behaviors, including those that are repetitive, stereotypical, and disruptive in nature.

In fact, research suggests that there is a connection between communication difficulties and the resulting production of undesirable behaviors. That is, many learners with ASD engage in interfering behaviors because they do not have key social and communication skills that allow them to interact successfully with others.

FCT is helpful for learners with ASD who are engaging in interfering behaviors and lack social-communication skills because they are systematically taught functional communicative acts that result in “marked reductions in the level of behavioral problems.” Furthermore, FCT facilitates functional and generalized communication skills that increase independence skills and improve the quality of life for individuals with ASD.

With FCT, learners are taught more developmentally appropriate forms of communication. For example, many learners with ASD engage in what is known as autistic leading, in which they take adults or peers by the hand and lead them to a desired object. FCT has been used successfully to replace autistic leading with more developmentally appropriate forms of communication, such as pointing.

However, simple requests for attention or assistance (like those taught in FCT) can be understood by many people in the community, and these partners are able to respond to the communication of people with disabilities.

For example, a teenager on the bus may be able to point to a picture requesting “help,” and the bus driver would be able to understand the message and help the teen count out his change. This scenario is far preferable to the same teen needing help but not being able to communicate that need and throwing his change at the driver!