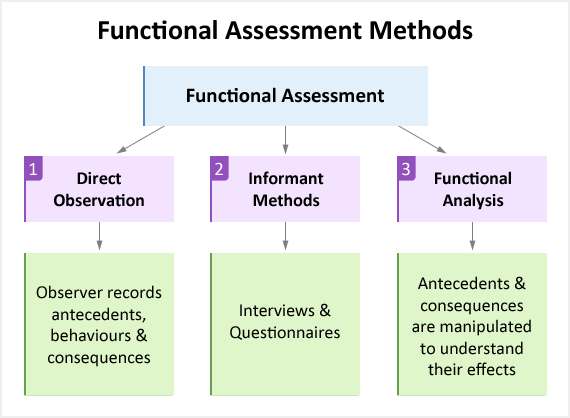 What is Functional Behavior Assessment? – Understanding FBA for Autism

Three-functional-assessment-methods—Functional behavior assessment (FBA), considered an evidence-based practice for use with students with Autism Spectrum Condition, is a process designed to gather information about the purpose a behavior serves for an individual.

It is important to emphasize that FBA is a process—not a form or a single procedure, but the organic application of a set of particular methods. In real-life environments, important variables may change quickly that may alter the function of a behavior for an individual, and in such cases, teams will need to conduct further assessment.

FBA can involve three types of assessment procedures or methods: Each level of FBA yields an increasingly more accurate assessment of the function of a problem behavior but requires the interventionist to have a greater understanding of behavior analytic principles and methods.

Before we proceed, it is important to consider why one would commit time and effort to conducting an FBA. Some seasoned teachers may feel comfortable approaching problem behaviors by applying procedures that have worked in the past for other students with similar behaviors. This approach may appear reasonable, but data suggest that interventions based on FBA are more likely to be effective. Furthermore, random selection of an intervention can result in a lengthy process of trial and error, which may negatively impact a learner’s educational process and social interactions, or may serve to strengthen problem behaviors. Finally, anytime we target a behavior for reduction, we must consider teaching an appropriate replacement behavior.

The FBA process helps us to identify functionally equivalent (replacement) behavior or behaviors that serve the same function as the problem behavior. Essentially, when possible, we want to insert an appropriate behavior in a student’s skills set where problem behaviors used to be.

The overriding goal of all educational/behavioral interventions is to increase an individual’s skills in order to help him/her function independently in naturalistic environments. Finally, practitioners are legally required through the 2004 reauthorization of the Individuals With Disabilities Education Act (IDEA) to conduct an FBA when a student has been suspended for more than 10 school days within one school year. A behavior intervention plan must be developed based upon data gathered from the FBA.