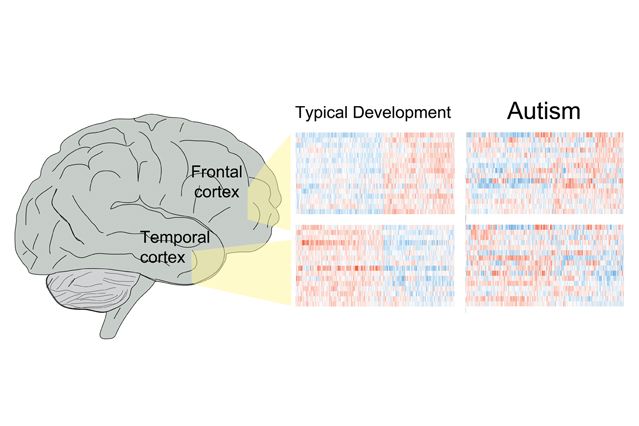 Autism Spectrum Disorders or ASD has baffled the scientists and doctors alike, since decades. A range of disorders with multiple combinations of symptoms are clubbed under the umbrella term ASD.

However, the difficulty in finding a cure for these disorders is largely because of its myriad, confusing causes. Genetic and environmental effects both contribute towards autism.

1 in 68 children is said to be diagnosed with autism. A new study led by UCLA scientists have found additional evidence that people affected with ASD, show similar molecular abnormalities.

251 brain tissues were collected for the study, originating from 100 deceased individual, among whom 48 people had autism and the other 49 did not have any abnormalities.

It was found that autistic individuals showed an almost distinctive pattern and shared a similar gene structure.

These findings and their results were published in Nature.

The findings confirm the earlier studies by providing a clear picture of what may happen at the molecular level in the brains of autistic individuals.

“In principle, we can use the abnormal patterns we’ve found to screen for drugs that reverse them — and thereby hopefully treat this disorder.”

According to the statistics available with Centers for Disease Control and Prevention, as many as 1.5 percent of the U.S. children are said to be diagnosed with autism.

The disorder is characterized by difficulties in social interaction and other behavioral issues. In some cases, ASD has been linked to DNA mutations, pregnancy-related infections or being exposed to certain chemicals during the time of pregnancy.

However, in most of the cases, the causes remain to be unknown.

In an earlier study published in Nature by Dr. Daniel Geschwind and team, it was observed that people with different kinds of autism had a general absence of “normal” brain pattern.  It was noted that genes in autistic brains are not randomly abnormal, but exuded a certain similar pattern, even though the symptomatic outcomes were different.

This discovery was an important step in autism studies, which showed that autism can be accepted as disease, rather than a randomised genetic fallacy.

In this  recent study, the team led by Geschwind tested and analyzed a much larger number of samples and found that the same pattern of  molecular abnormality are present in the autistic brain. It placed the older study vis-à-vis  new patients to confirm the earlier findings.

Dr Geschwind said “It strongly suggests that the pattern we found applies to most people with autism disorders.” The study also confirmed that first ten years of brain development is a key point in dealing with autism.

Among autistic people, it was found that the temporal and frontal lobes develop similarly, as opposed to their difference in growth found among normal people. A gene, termed as SOX5 has been found responsible for the failure in the brain development in these regions.

A study like this,  that aims at defining autism as brain’s attempt to counter a disease, caused by affected genes, may bring a breakthrough in terms of the medications are used.