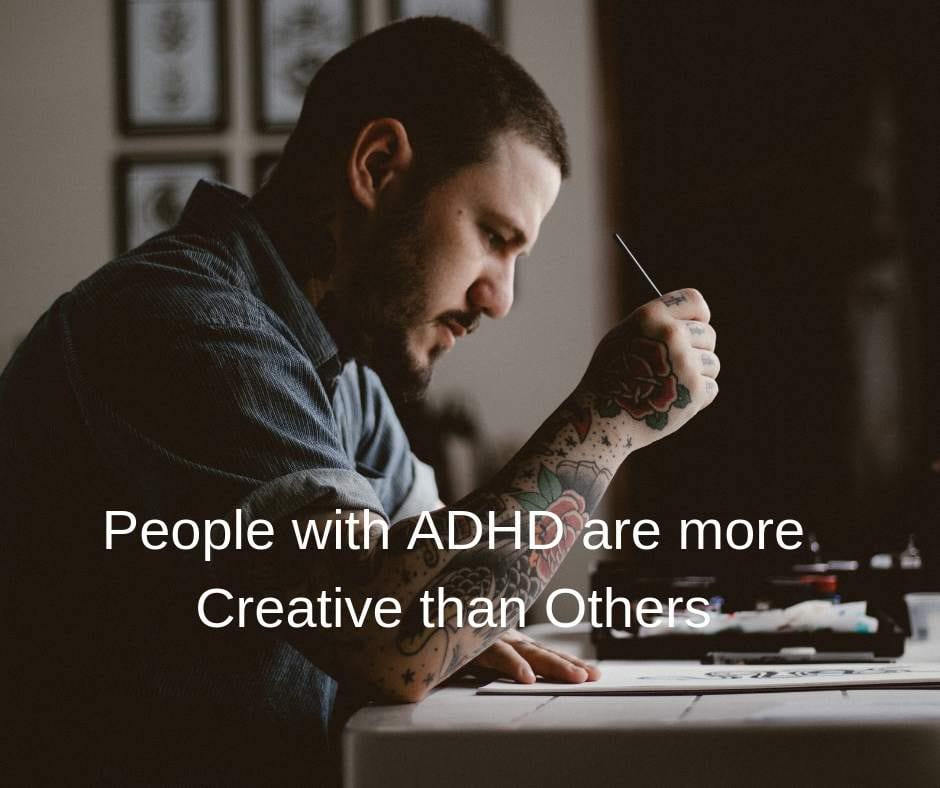 People with ADHD are more creative than the others

Creativity entails using one’s imagination to produce or conjure up original ideas. People can be creative in different ways and in different areas of life. Think of creativity as the ability to form something new under the sun. More often than not, when we talk of creativity our thoughts shift towards areas like poetry, visual art, composing, engineering or architecture.

Recently, there have been abundant comments to suggest that such great and renowned creatives as William Shakespeare, Wolfgang Mozart, and some others had a thing with ADHD. Certain people even attributed the towering magnificence of their various careers to ADHD symptoms.

Before now, ADHD had been viewed generally with quite a terrible eye because its symptoms are thought to be synonymous with extreme abnormal behavior. However, a lot of people now have the impression that ADHD symptoms can boost the creative mind. In a research study conducted to assess problem-solving initiatives in a group of college students, it was found that those who had ADHD tended to respond with better and more original ideas in contrast to those who didn’t have the disorder, who were more likely to respond with already existing, hackneyed ones.

Another research work published in the Journal of Creative Behavior gave similar evidence. In this study, 52 college students ( 26 with ADHD and 26 without ) were asked to perform two creativity tests. The first one involved drawing alien fruits different from those on Earth.

Students with ADHD were reported to have invented more original works than those without ADHD. And in the second test which demanded that the students invent product labels, ADHD students still found their way around those without the disorder. While this may get you wondering how these, perhaps, extreme attitudes associated with ADHD could actually do one any good at all,  certain groups had outlined reasons to support this claim, although the basis for these assumptions is not concrete.

For the fact that attention deficit hyperactivity disorder can bring about a whole lot of impulsive attitudes in a person, some people argue that it may amount to an increase in risk-taking ability as these set of people are often driven by the urge to try out something new each time, oftentimes not minding the risk involved.

Hence, by way of analogy, there appears to be no restriction to how wide and far they can think and imagine, thereby snowballing their chances of new discoveries and thinking towards uncharted territory. Although it is true that children with attention deficit hyperactivity disorder tend to readily lose interest and get distracted in most areas of involvement, especially during discourse, studies have shown that these children show interest in some special areas unique to them, and when they begin to pick interest in these areas, they often tend to hyperfocus, often inordinately.

This is believed to be a potentially great tool in the mastery of creative arts and activities that demand creativity, as it is believed that the longer one sticks to a particular task they’re genuinely interested in, the better they will perform at it.

However, as much as you may be tempted to agree to the above claims, some other studies have presented different outcomes to those preceding ones. This can be found in a new study done at Shahid Beheshti University of Medical Sciences in Iran. Led by Banafsheh Aliabadi, the research team had children diagnosed with ADHD, take tests designed to judge a child’s creativity levels.

A control group was used which comprised non-ADHD children. It was evident from the report that children diagnosed with ADHD have less flexibility of thought and do not differ from the children in the control group in their creativity or originality in any way.

In our world today, we have a lot of famous creatives, entertainers, and even entrepreneurs who have an ADHD diagnosis, some of which have credited a huge part of their creativity to their ADHD symptoms, among which Black Eyed Peas founder, will.i.am and Oscar-winning director Alejandro González Iñárritu are notable examples.

But many experts are of the opinion that although there seems to be a connection between ADHD and creative thinking, there is no evidence to prove that ADHD promotes creative skills in such persons. In fact, Dr. Edward Hallowell MD, popular author, and lecturer,  it this way, “ADHD doesn’t enhance creativity, but people with ADHD tend to be more creative than the average person.” The trick, he said “is to turn all those ideas into something useful.”