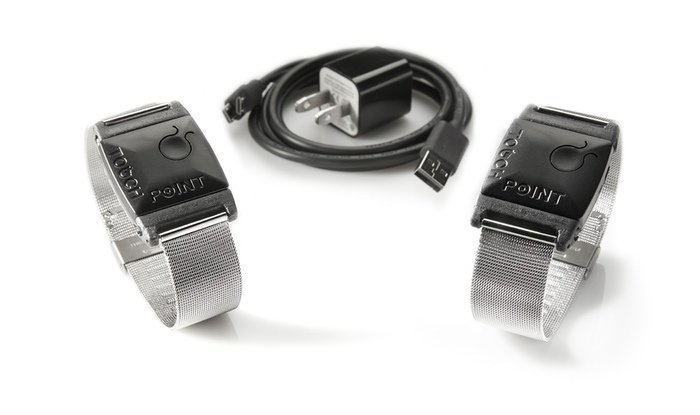 Touchpoints Buzzies Wearable Device for Autism and ADHD – Get the Buzz?

Bi-lateral Alternating Stimulation-Tactile Technology, abbreviated as BLAST, has been in use clinically for a while now.

The technology is mostly associated with EDMR therapy, or the Eye Movement Desensitisation and Reprocessing, which is a commonly used method to treat PTSD, anxiety, phobias and other associated psychological disorders. Buzzies, the wearable device for Autism developed by Touchpoint Solutions

It was noted by Amy Serin that while using BLAST, the process of desensitisation caused a much lower amount of distress to the patient. Eventually, she noted that the technology had far reaching effects.

Gifted children found it easier to sleep, while lower levels of stress  was noted among children as well as adults, while using the technology. It showed an immense positive psychological and physiological effect within seconds of use.

This knowledge led her to co-found Touchpoint Solutions, along with Vicki Mayor, to develop BLAST into a wearable anxiety and stress reliever – the Buzzies.

A groundbreaking product, the Buzzies work along with the executive functions and limbic system components of the brain and relies on the formula of F3, Fight, Flight or Freeze. This F3 is the mind’s reaction when it faces a stressful situation, leading to anxiety.

The device improve the psychological condition of the individual by overriding the Flight or Fight mechanism using the BLAST.

The Buzzies are non-invasive wearable devices that use tactile stimulation.  A few minutes of use, affects the brain considerably and the wearer feels more focused. The device can be controlled through an App that is available for Android and IOS devices.

“I don’t’ want people to live with chronic stress. I want them to know there’s a cost effective, non-invasive solution and in real time calms them down so that frees them up to live their best life.” She said.

Parents of autistic children have already found the device to be useful. Young students like Jacob Holma, who has autism, found it difficult to concentrate. He had, like many others with ASD, undergone hours of therapy, medication and struggled with the symptoms.

Jacob was lucky to have met Dr Amy Serin, who suggested him to use Buzzies. Jacob’s mother as well as his teachers noted how Jacob could focus better in class, and his episodes walking out of the class lowered since the use of Buzzies.

“For him to be calm and doing his work is amazing,” Sherri, his mother, said.

“I feel like I stumbled on a miracle that I want more people to know about,” said Dr. Serin, who uses Buzzies in her own home with her children.

All of these can be addressed by a therapist or a doctor. However, rising numbers of people in waitlist means a lot more people need help. And therapists are not available 24/7. Most of the time autism symptoms are dealt with the affected individual and families.

Buzzies is a watch-like band that can be worn everyday, any time of the day, at schools, work or anywhere. It wins because of its simplicity of presentation, easy wearability and effective intervention. It not only minimises stress, but controls cravings and manage insomnia.

GET YOUR OWN BUZZIEBefore the Promo is ends

With more and more people vouching for the product, it is possible that autism research has finally hit upon an actual technology that gives immediate relief to its myriad symptoms.

Want to learn more? Check out our latest Buzzies Review for Autism, ADHD and Anxiety.