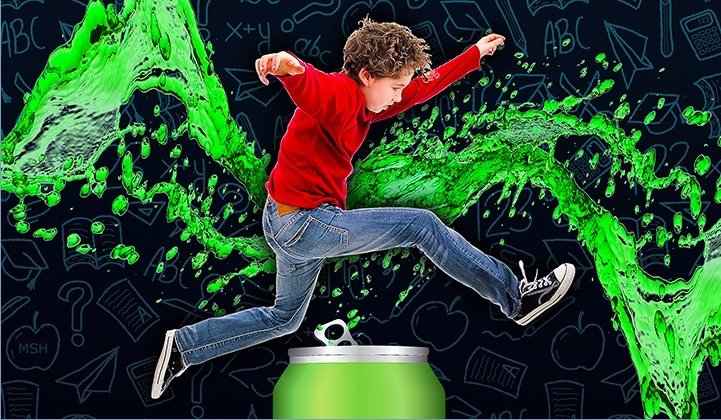 Recently, an interesting study conducted by Yale University revealed that hyperactivity in children may be caused by such high-sweetened drinks.

Consumption of Energy drinks, though well known to be an unhealthy option, is on a rise. What’s more disturbing is its rising popularity among children.
Recently, an interesting study conducted by Yale University revealed that hyperactivity in children may be caused by such high-sweetened drinks. Also, this hyperactivity has direct consequences on children’s creativity and success in school. Thus, researchers recommend more awareness among parents and teachers so that they can stop providing such drinks to children.

The study was conducted by professor Jeannette Ickovics and involved as many as 1649 children from a school district in Connecticut with an average age of 12 years. The drinks involved in this investigation were handpicked by the research team and the quantity was also monitored. The findings indicated that boys tend to be more prone to drink sweet beverages than girls of similar age.

Upon completion of the study, Ickovics concluded that “As the total number of sugar-sweetened beverages increased, so too did the risk for hyperactivity and inattention symptoms among our middle-school students. Importantly, it appears that energy drinks are driving this association”. This conclusion warranted the team to warn the parents of the behavioral implications that energizing drinks have on the school performance of their children.

Previous studies demonstrated that children with ADHD (or attention deficit hyperactivity disorder), are less likely to be attentive during classes and are prone to nervousness. Consequentially, this leads to defective relationships with classmates and even to injuries. Further studies are needed to establish the correlation between sweetened drinks and hyperactivity in order to enlighten the researchers on a proper treatment or therapy for children that suffer from this disorder.

Additionally, researchers from the Rudd Center for Food Policy and Obesity (CARE) have also contributed to some of these findings. They discovered that most of the drinks consumed by children have up to 40 grams of sugar. After this analysis, they came up with some conclusions to establish a reasonable consumption limit of 30 grams of sugar per day. Another interesting finding from CARE is the fact that obesity is, more often than not, caused by such sweetened beverages given the fact that one out of every three children has weight problems.